The granite showroom that has plans to move into the Center Towing building adjacent to Strongsville Commons also has plans to serve coffee and pastries, and even have a back patio.

“The cafe will be a first for us, to try and bring 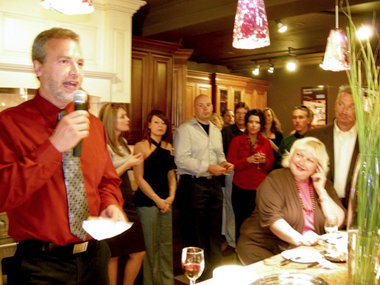 people into the store,” said James Justice, owner of Architectural Justice, the Mednia-based design showroom that’s looking to expand into Strongsville, at the Oct. 4 Planning Commission meeting. “In the future, on Thursday and Friday nights we may look at doing deserts and small plates.”

Justice said the proposed location will showcase the company’s work in exotic materials, including granite and onyx, in residential designing and remodeling. The new showroom, he said, will “bring the best of what we have in Medina to Strongsville.”

“Strongsville’s been a great center of business for us,” Justice said. “We feel like we can serve Strongsville really well.”

Justice said the plan is to add a second story to the current building – which has been there since the 1950s – and add a back patio, with tables and chairs.

But the plans aren’t going to come easy.

Because the building’s been around so long – Economic Development Director Brent Painter said it was before the city started keeping records – it hasn’t been reassessed by Cuyahoga County since the 1950s, and may actually sit on three parcels of land, said Strongsville Design Engineer Lori Daley.

“We’re in the process of confirming that with the county,” Daley said. “If so, that will need to be combined into one parcel.”

Daley also said Architectural Justice will need to have a detailed site plan taken of the lot, get a conditional use permit for the 36-seat maximum patio and a variance for 22 parking spaces instead of the required 25 spaces for a lot that size.

Strongsville City Planner Robert Hill said there were a few setback issues with the building.

The catch is, those have to be done – or at least on their way to being done – in 60 days, Justice said. That’s the timeline set in the agreement between Center Towing and Architectural Justice to purchase the site.

“It has to be approved, or at least look like it will be approved shortly, in 60 days” Justice said.

Dan Kolick, the city’s assistant law director, said he suggested that Justice and the city meet internally between meetings to help speed the process.

“You need to keep this moving along,” he said.

The Town Center Commission, which has to sign off on development projects around the intersection of routes 42 and 82, met in September for the first time since 2009 to approve the plans to replace the building, which has been there since at least the 1960s, Painter said.

Center Towing will operate solely out of its Marks Road location and continue being the city’s go-to towing agency, Painter said.

Be the first to know about new products, projects, or promotions via email.